After a cold night in the Elk Prairie campground in the Prairie Creek Redwood State Park, we had the chance to meet on the ground M. Keith Bensen, biologist at the US National Park Service. He testified the twisty history of the redwoods while we were walking among these huge living beings…

Biology of the Incredible Redwoods 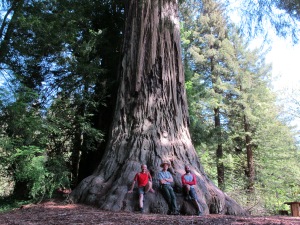 At the bottom of a Giant redwood with Biologist Keith Bensen

The Redwood (Sequoia sempervirens), whose common names include coast redwood or giant redwood, is an evergreen, long-lived tree living 1200–1800 years or more. This species includes the tallest trees living now on Earth, reaching up to 379 feet (115.5 m) in height (without the roots) and up to 26 feet (7.9 m) in diameter at breast height.

Before commercial logging and clearing began by the 1850s, this massive tree occurred naturally in an estimated 2,100,000 acres (8,500 km2) along much of coastal California (excluding southern California where rainfall is not sufficient) and the southwestern corner of coastal Oregon within the United States. An estimated 95% or more of the original old-growth redwood forest has been cut down, due to its excellent properties for use as lumber in construction.

The name sequoia sometimes refers to the subfamily Sequoioideae, which includes S. sempervirens along with Sequoiadendron giganteum (giant sequoia, the one we will see in the Eastern part of California, notably in the Sequoia National Park) and Metasequoia glyptostroboides (dawn redwood, in South-Eastern Asia).

Anciently more widely spread in the northern hemisphere, the redwood is now limited to a tiny territory on the US North-Western Coast. It has little evolved since the Jurassic time because it has displayed an astounding biological and ecological characteristics to survive to many threats.

Redwoods are naturally resistant to insects, fungi, and fire because they are high in tannin and do not produce resin or pitch. Their thick, reddish, pithy bark also provides protection and insulation for the tree from fires. Even a downed tree can survive. The blackened hollows  in trunks are a testament to the trees’ remarkable ability to survive. They are the only conifers to be able to reproduce from spouting. They are able to regrow when they are cut from roots or from dormant buds in the burls.

Because these trees are so tall, the treetop needles are exposed to more dry heat than the needles of branches in the dense canopy below. To compensate for this, redwoods grow treetop needles with tight spikes that conserve moisture, due to little evaporative surface. The lower branches, on the other hand, produce flat needles in order to catch additional light through the thick canopy.

These trees have shallow root systems that extend over one hundred feet from the base, intertwining with the roots of other redwoods. This increases their stability during strong winds and floods.

M. Bensen informed us that Redwood forests are the most productive ecosystems on Earth per area unit. This is due to their ability to grow close to each other, fastly and thickly. It is about the double of the productivity of the tropical rainforests.

Loud Fight for the Redwood Protection

This is about the first step of the Nature Conservation that’s M. Bensen reminded us. In the 1850’s, the first Europeans on the Western US coast, taking part in the Gold Rush, had really the feeling of infinity in this land because everything was plenty, taller, bigger, wilder, etc. They found that the forest could be a good way to make quickly a lot of money. At that time, despite there were very populated tribes living there for centuries, the « first » white people arrived could claim for the propriety of the land. When people started to discover the productivity of the redwoods and their size, the forest became the propriety of several timber bearings that started the industrial exploitation of the forest. It’s been years since the emergence of a public awareness about what’s going on in the forest, and the consciousness of the impossibility to be re-create these unique ecosystems, witnesses of the evolution and natural heritage.

When M. John Muir, a Scottish-American biologist, traveled to this land for the first time, he was completely astonished by the beauty of the redwoods, but alarmed by the frenzy of the logging rush since the discovery of the steam power.  Hence, he had the crazy (because new at that time) idea « to make this land a public access » and to protect these « Cathedrals of God » just because they are beautiful and unique. It was the first time ever that people wanted to save a « tree », a « plant » instead of landscapes.

In the early 20th century, with activist friends, he initiated the nature conservation in the western world with a smart idea. The timber companies were very powerful, very rich. He advocated for the protection of these unique species and mobilized a group of important and wealthy people from California, and soon from all around the world, to buy the redwood land to timber bearings. The League « Save the Redwoods » was created. Then, these patches of forest were given to the California’s state that became state parks later. The League and other active NGOs received a lot of pressure from the timber industry and private sources. Thanks to the efforts of passionate people, only a bit more of 4% of the original old-growth redwood forests (50.000 acres) remains! The 96% has gone for ever. But thanks to the ability to spout, many second, third-growth forests of redwood can be seen in the existing state and national parks that we visited.

Because the old redwoods were unique and a natural wonder and overall the fight for their preservation was so loud compared to what happened for the « old » national parks like the Yellowstone or the Yosemite, the site received the UNESCO’s designation of World Heritage site in 1980 then Biosphere Reserve in 1983. It was then the first UNESCO’s designation in the USA!

From Opposition to Green Business

The transition after the creation of the parks was hard for people living in and around the parks. The cities and families that lived from the forest became ghost cities, with a huge level of unemployment. It was hard to convert the economy and the habits towards one preserving the environment and benefitting from it. It was a long process of collaboration to raise awareness about the benefits from a quality environment and the associated strict regulations.

More and more, people understand that the Nature can be marketed (especially in the redwoods). Since 1960’s, the ecotourism started. Now it is more on the way of a mature ecotourism market. Now many companies use the symbol of the redwood in their marketing. Organic food from local new farms served in INN hotels, kayaking companies raising awareness about the environment protection, wildlife watching lodges, etc: it is very diversified. And often, it has a direct benefit for the local community (including tribal people) as some projects are owned by them or employ them. But it is still hard to evaluate and to « see » the positive impact of the park on the economy of the territory, A 2011 study showed that in every 1 dollar of taxes spent for the park (the staff, administrative and operational costs), it gives back 7 to 10 dollars to the local community through tourism, multiple effect. Interesting to have a number in mind!!! Also, the Parks employ many people, locals when can be.

A snack and souvenirs boutique and the famous one-log house

The tourism sector is very dynamic in the area. There is a bit less than 500.000 visitors per year in the national and state parks (2010). The designation by the UNESCO might have had an effect on the nature of visitors, with more non-North America tourists (Europe, South America…). Even if the effect cannot be measured, the United Nations recognition can help in some cases. For instance, the Parks service was recently in conflict with the Highway agency about the restoration of a road on the coast within the park perimeter, that could lead to the destruction of some redwoods. After the UNESCO solicitation by the Park service, the UNESCO supported the Park service’s option and finally, the Highway agency changed its plan.

About the Difficult Collaboration with Tribes

Prolific tribes (Yurok, Tolowa, Chilula) were used to live in the redwood territory, estimated up to 1 million, due to its high productivity. Also, this piece of the western coast was one of the last to be invaded From the near-extermination after « bad blood » episodes when they were cruelly killed, tribes are still living in small reservations. Since 1950’s, tribes started to obtain some rights. Till the 60’s, white American took their children to teach them English and acculturate them. Through « mutual agreements », they gained to right to be the priority group to be consulted in case of any specific operation on the ground.

Despite that, the scar is still wide open. Tribal people still see white people « both as friends and enemies », said Keith B. Even if the park want to involve the tribes in their operations, it is hard because the trust issue remains. Anyway, the cooperation is closer and closer. The Yurok Tribe is particularly involved in the restoration of watersheds or in the rejuvenation of the forest, sharing their traditional ecological knowledge and associated practices.

The difficulty of co-operation comes often from the apparent opposition « between the natural needs of tribal people living in the parks and the world heritage conservation », confessed M. Keith. What is « natural »? Is the traditionnal fishing and hunting practices againts the conservation objective? Many questions appear and are unsolved. But what is sure is that the main threat in this beautiful natural area is again (like in other national parks we visited) the disappearance of many precious traditional knowledges.