During our stay in Palenque, Chiapas, the Heritage Route discovered with interests the conservation program about the Scarlet Macaw. The Scarlet Macaw (Ara macao) is the largest parrot in the world and is member of a large group of Neotropical parrots called Macaws.

World Heritage in Danger of Extinction 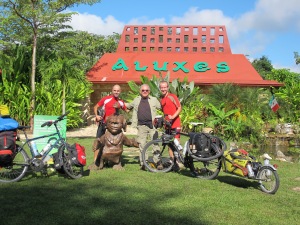 In front of the Aluxes Eco Park with PhD Alejandro Estrada, Palenque, México

The Scarlet Macaw can be found in tropical rainforests of Central and South America, including Mexico, Guatemala, Belize, Colombia, Ecuador, Peru and Brazil. It  is one of most endangered species in Latin America. It is estimated that now only a mere 2% of the original populations exists in its wild habitat (the original distribution in Mexico covered the southern lowlands of Tamaulipas, Veracruz, Tabasco, Oaxaca and Chiapas states), which means about 50 individuals in the mountain region known as Chimalapas (Oaxaca, Mexico), 150-200  units near the Guatemalan border of Mexico (Biosphere Reserves Montes Azules / Sierra Lacandona) and 200 more between Belize and Guatemala. Mexico hosted the major part of the species populations. Then, not only is the conservation of the remaining populations in Mexico important for the country itself, but also for the whole world. In 2010, the species was listed as « in danger of extinction » by the Environment Agency (SEMARNAT). It is extinct in Palenque for more than 70 years ago.

The Scarlet Macaw know for their highly coloured and exotic plumage are highly intelligent and resourceful creatures with a great sense of fun. The Scarlet Macaw is a charismatic species that has inspired myths and legends along different cultures, especially for Mayas. The feathers of the Macaw are highly prized by some cultures and are used in ceremonial costumes.

The Scarlet Macaw is currently threatened by:

These threats jeopardize the Scarlet Macaw long-term future. In Mexico, it is mostly the first threat that explain its disappearing. As soon as eggs are discovered by poachers, they are collected and traded in the black market chains. « It has been estimated  that from the time of capture to the selling time the 90% of the species dies. The others get into the pet trade market », says PhD. Alejandro Estrada, an international specialist of macaws and primates, and one of the leading researchers from the Institute of Biology of the Universidad Nacional Autónoma de México (UNAM).

A project of reintroduction of the Scarlet Macaw (Ara macao cyanoptera) has emerged since 2007. It has recently undertaken new developments. It aims to reintroduce the Scarlet Macaw species in the Palenque national park where it disappeared more than 70 years ago and re-create a healthy and reproductive population with a probable connexion with the remnant population in South of Chiapas (Montes Azules – Lacanja). The program is coordinated by the ethologist PhD. Alejandro Estrada (UNAM, also president of the scientific council of the Aluxes Eco Park).

The project was consolidated by forming a strategic alliance with renowned institutions such as the Xcaret Eco-Archeological Park of Quintana Roo, the Biology Institute of the National Autonomous University of Mexico (UNAM), the General Directorate of Wildlife and the National Commission of Protected Natural Areas through the Directorate of the Palenque National Park.

Guacamayas rojas in the aviary in training process

The Success of the Project

As explained by Alejandro Estrada, « the process of reintroduction of the specie is a controlled scientific program called soft-release protocol« . That’s why they are having so much success comparing to similar programs of reintroduction of the same species in Central America and South America (Costa Rica, Guatemala, etc). The protocol is very important, they do not just release the birds into the wild but they teach them how to adapt to natural conditions after captivity and to survive. They make sure that they have abilities to survive. As the Chinese proverb says « Give a man a fish and you feed him for a day, teach a man how to fish and you feed him for a lifetime », the technicians, scientists and practionners teach the birds how to find food, how to find a hole in a tree for nesting, etc. The process of reintroduction of the species in the long-term process that takes months.

The project has several good practices that must be highlighted :

They teach the birds how to adapt gradually to wild conditions. For example, they do not cut their link to their current home: the aviary. First, twice per day, they let them some food and gradually they reduce the amount of food to create on them the instinct to search for their own food. According to Alejandro Estrada, they first came regularly at « lunch time » and finally step-by-step they almost stop coming. This forces them to explore and not to be dependents to human. That’s why they receive only the youngest Scarlet Macaw from the Xcaret park (around 24 months old) because they have more abilities to survive and to learn how to explore and to be stronger. This protocol integrates knowledge about the guacamayas ethology.

Before the liberation day, they teach them how to create the aversion to the human being, in order to protect them from potential poaching or hunting situation that could occur in their life. Employees entering in the aviary are disguised in order to impersonate bird poachers and simulate a hunting situation that may create Scarlet Macaws’ instinct to  runaway. According to Alejandro Estrada, the protocol is very successful. The Scarlet Macaws have a very important visual memory given the fact that they possess a strong tetrachromatic vision, allowing them to have a very good memory.

The birds are housed together at what they call  » Jaula de Liberacion » before being released. The training program facilitates flock formation of the macaws because they naturally live in fission-fusion social groups where a large community of individuals separate into smaller groups of variable size and composition before re-gathering altogether . An important point of the process is that the first flock released normally makes easier the adaptation to the wild for the newest flocks because frequently the act as « tutors » for the newcomers.

All this, is part of an important scientific monitoring of control and survey. What is important for Alejandro Estrada is to guarantee the highest probability to survive. Each released macaw carries a subcutaneous microchip and  a metal ring with an alphanumeric code implanted in one leg. Both registered and approved by the SEMARNAT. Moreover, they bear a mark on the beak in order to facilitate identification at a distance. Also, at the time of every release event, the project launches an important promotion campaign on local radios, television, in order to inform and engage people living in the city of Palenque and around in the preservation of this national natural heritage (Maya-Chol y Maya-Tzeltal indigenous communities). « This is working very well as people are now the best witnesses and alerters. Sometimes, inhabitants call to report macaws individuals flying in their area, or to denounce someone who captures one individual ». explained Alejandro Estrada to us.

The results of the program after 1 year:

The project implementation started in April 2013 with the first release from 17 macaws originated from Xcaret in the nearby jungle of the Ecopark Aluxes. Til December 2013 were released 50 macaws in total through four events of release. All the macaws released but two survived, i.e. 96 % of the released population. The fifth release event will occur on March 23rd, 2014.

Two major achievements of the first year of release are as follows:

As said Alejandro Estrada, « this is a tangible conservation ».

For more information on the biology of the Scarlet macaw or the project (in spanish), read the following links : Guacamayas pagina web-comunicado prensa 13 feb 2014, website.

3 réflexions sur “The Scarlet Macaw in Danger of Extinction is Back!”