As we are following the Caribbean coast of central America, along the « Riviera Maya » in Mexico and now in Belize, we are sadly surprised by the quantity of big and ugly infrastructures for tourism purposes. Placencia Peninsula, Belize, here we are.

This is a long white sand peninsula, originally surrounded by beautiful mangroves, healthy biodiversity, terrestrial and marine. Now, it is turned into a succession of resorts, getting bigger and bigger, luxurious or midrange. The traditional village Seine Bight of Garifuna people (descendants of African slaves and Caribbean indigenous) is now encircled by Maya beach and Placencia urban developments. Between, we can see in live the newest developments: drastic natural habitat removal for grading, drainage of wetlands, landscaping using excavators, bulldozers… After the massive destruction of the ecosystem, there is the step to make it green again in order to recreate a green and secure environment for tourists or landowners (except that these artificial elements will take years to recover ecological functions, if they can). Now, the cherry on the cake prepared for the show: this residence or hotel will be presented as eco-friendly, e.g. on this real estate signboard for a sale of lots for a future eco-luxury residence… 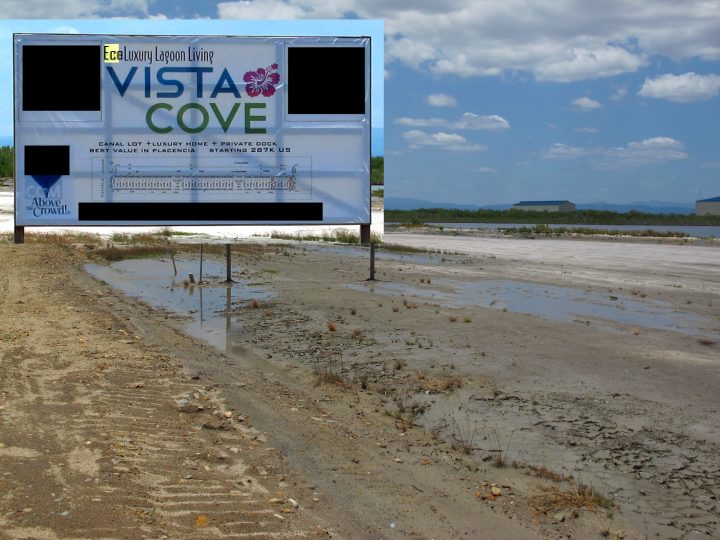 Excuse me!? Eco-what? Are you kidding? Whatever they do after to protect the environment, they’ve just ruined the wonder of the place, and all together the whole Placencia Peninsula. What an hypocrisy of promoters and bloody greenwashing marketing. Let’s be more responsible and vigilant in our consumer choices!

Demonstrating the absurdity of this short-term perspective projects is easy. First, we can see lots of buildings and lands for sale, which is an evidence of the weak business model, whereas they are building new ones just nearby following the same philosophy of easy and quick income generation. They are contributing directly to the destruction of local traditions and the environment. On one hand, traditional living conditions, although they are often harsh, are replaced by « consumerist » and « capitalist » ones.

People from traditional villages are moving to urban centers on the coast to work on low-wages resorts and other tourist companies. As they cannot live in descent way in these costly cities, they have to stay in poor periurban settlements, with the temptation to steal some of the wealthy neighbours. On the other hand, natural habitat and species are sacrified to this race of quick profit generation.

All the Caribbean coast was the ground of lushly forests of all scales, mangroves, healthy coral reefs, wetlands and complex superficial and deep into ground water systems including cenotes, caves, rivers and lagunas. These were the habitat of tons of species. Many of them are in danger of extinction, because of the one-direction tourism industry: mass tourism. That is the present case of Manatees, American and Morelet crocodiles, Green turtle like other marine turtles, Brown pelican, etc…

It is time to Fight Against  Do you Want a New Cancun?

We Do Not Inherit the Earth from Our Ancestors; We Borrow It from Our Children

It is high time tourists boycotted all tourist activities that are not really eco-friendly (the logo or the slogan does not mean anything, we need concrete action). And it is high time WE could support and facilitate new alternatives to land-consuming tourism like responsible or ecological tourism projects!!! They are very few, and shall be more exposed and reproduced, always thinking that only small-scale businesses can have positive effects on both local communities and the environment.

Similarities of uncontrolled development between Placencia peninsula and lagoon (Belize) and Cancun – Nichupte Lagoon area (Mexico) are worrying (as it is stated in the pending Program of integrated water and sanitation for the Placencia Peninsula). Fortunately, the development of Placencia is still in its infancy and there is still an opportunity to rectify the state of affairs and allow for better development planning that will prevent future environmental deterioration.

It is high time the Placencia Peninsula (like other still preserved areas) could be prevented from becoming a new Cancun!

Here is an example of Mexican NGO fighting for the preservation of the Riviera Maya in Mexico, against political corruption and mass tourism : SAVE.

Other NGOs do a great work to preserve endangered species or natural habitat like the one of American Crocodile Education Society runned by passionated Cherie and Vince, located in Ambergris Caye, Belize, or the one of Sea to Shore Alliance for the Manatee Conservation Program in Belize.

Our « Heritage Route » Project is promoting some of these ecological, community-based or responsible tourism projects. Help us to support and promote them to make them more visible and numerous!

Une réflexion sur “In Live Destruction of Coastal Ecosystems by Mass Tourism: Take a Stand Against!”