Once more, we did not have chance to see many animals in this very rich in biodiversity protected area of Belize. The Cockscomb Basin Wildlife Sanctuary is part of the Meso-American biocorridor running from Mexico to Panama.
Belize (government and NGOs) tackles environment conservation as a national priority, with an extensive protected areas system, co-management operations and very motivated and skilled teams. The Belize Audubon Society, a renowned conservation organization, welcomed us and organize our amazing stay in Cockscomb. During two nights (entrance fee 10$/person, camping 20$/night/person), we really felt like sleeping in the middle of the rainforest, surrounded by animal noises. That was magic! Good to know that natural and easily accessible paradises still exist on Earth. 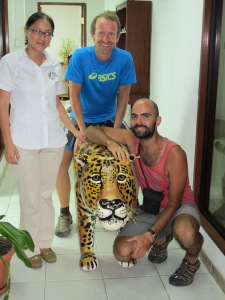 The Belize Audubon Society (BAS) has made Belize a model of a developing country with an environmental consciousness. BAS facilitated the early passage of legislation for the protection of wildlife and establishment of protected areas. BAS proposed areas that should be protected and lobbied until wildlife sanctuaries, natural monuments, nature reserves, and national parks were declared. The Belize Audubon Society led in the management of these protected areas. Through a good working relationship with the Government of Belize BAS continues to preserve the country’s precious natural resources for the generations to come.

The Belize Audubon Society was formed in 1969 as a non-profit NGO by a group of enthusiastic and energetic conservationists. Dora Weyer was the moving spirit behind the formation meeting. As a member of the Florida Audubon Society, Dora knew that the Executive Director, C. Russell Mason (Russ), was interested in starting foreign chapters. By making new appropriate friends interested in wildlife she succeeded in start a new chapter in Belize.

In 1973, BAS became independent from the Florida Audubon Society. During the first fifteen years, the work of the Society was done solely by volunteers using donated materials. After Belize gained its independence, the Government passed the National Parks System Act (1981) to initiate the establishment of protected areas. Half Moon Caye Natural Monument was the first area protected under this act. The Belize Audubon Society was instrumental in both of these actions. By the end of 1984 some funds were obtained to support management of protected areas and establish an office with professional staff.

Cockcomb Basin Wildlife Sanctuary is recognized internationally as the world’s first jaguar preserve (The name Cockscomb comes from the series of peaks that can be seen from an Easterly view and resembles a rooster’s comb). It is also known for its spectacular waterfalls, mountain views, nature trails, and rich diversity of neotropical birds. The tracks of wildcats, tapir, deer, and other wildlife are often seen on hiking trails or along the bank of South Stann Creek. You should plan an extended visit so that you can appreciate all that Cockscomb has to offer. The park has cabins and campgrounds for overnight visitors.

Cockscomb Basin Wildlife Sanctuary is a reservoir for biodiversity. Hundreds of species of plants with exotic leaves and flowers, colorful insects, singing birds, furry mammals, scaly reptiles, and wide-eyed amphibians live in this complex tropical forest community. Each one has a function that serves the community as a whole. Each one is adapted to the conditions that make the community unique. The mosaic of ecosystems in this rugged landscape suggests the limited extent of our knowledge of the Sanctuary’s biodiversity. Some areas are still unexplored.

The forest at Cockscomb is a tropical moist forest. Tropical forests are disappearing at an alarming rate. Not only does this negatively impact the plants and wildlife, but the water cycle itself is disrupted, and the consequence is increased erosion because there is no vegetation to act as a « buffer » to hold the water in the plants and soils. And Belize is unfortunately not the exception.

History of the Protection of Cockscomb

In the early 1980’s, concern for the jaguars of Belize was raised from two different places. James Hyde, Permanent Secretary for the Ministry of Natural Resources had been approached by a concerned citrus farmer who had encountered jaguars in his orchard. At the same time, Archie Carr III, Assistant Director of the International Division of the New York Zoological Society, ran across references to jaguars in Belize in hunting magazines. He was in contact with Dora Weyer and asked if BAS would like a study of jaguars in Belize. Alan Rabinowitz, a graduate student at the time, was commissioned to determine the jaguar population.
Through Dr. Alan Rabinowitz’s ecological study conducted between 1982 and 1984, it was observed that the Cockscomb Basin contained the highest density of jaguars ever recorded. Therefore, in 1984, the area was initially declared a forest reserve with a “No Hunting” ordinance to protect the largest jaguar population and other wildlife species. However, after much concern that the Cockscomb Basin Forest Reserve could not protect the jaguars’ habitat, a small portion of the Reserve was declared as a wildlife sanctuary on 1986 (specified for a significant specie which is the jaguar, which is different from a national park).

Over the years the Sanctuary has expanded from 3,600 acres to 128,000 acres. The Maya Mountain extension in the south connects Cockscomb with Bladen Nature Reserve. This makes a continuous corridor of protected areas totaling 250,000 acres, part of the Meso-American corridor.

This is one of the eight protected areas co-managed by the BAS with the Belize Forest Department. Ten people work on the Cockscomb sanctuary dealing with maintenance, support of research operations, attending tourists and patrolling. This is not enough considering the area. They concentrate their patrolling efforts in key-areas where it is known people do illegal fishing or hunting (the only human activity permitted within the sanctuary is ecotourism ; « preservation zones » are limited to scientist experiments). The BAS does its best! The objective in Cockscomb for the BAS is to maintain the population of jaguars. Despite the efforts, it is not increasing due to deforestation and illegal poaching.

Among the present and future challenge, the BAS intents to involve more local people, taking into consideration its past weaknesses or failures. Through a Global Environmental Facility Small Grants Programme, a project was funded starting in 2013. It aims to improve the sustainability of Cockscomb through the promotion of sustainable supplementary livelihoods, an environmental stewardship programme and monitoring incursion trends of 7 communities living in the buffer zone. Because it is not enough to understand and take care the needs of wildlife; it is important also to know about the concerns of Belizeans who share the land with wildlife. Community-based development encourages people to work cooperatively and to optimize the benefits of the integrity of natural and cultural resources. The BAS aims to provide opportunities for stakeholders to participate in the management of the environment, adopt sustainable practices that are compatible with existing values, and create alternative livelihoods (like growing native chickens, honey bees to prevent burning or hunting). In comparison to the past, this project gives the floor to local people to know what they need and want. It is coordinated and implemented by the Belize Audubon Society along with its partners- the Department of Cooperatives, the Ministry of Agriculture, the Belize Defense Force, the Tourism Police Unit, the Forest Department and the Special Patrol Unit.

The environmental education is another important issue. Several programs and events aim to raise awareness on environmental issues to tourists as well as local people. Collaboration with other protected areas of Belize should be pushed, as well as with neighbouring countries territories. Despite current political obstacle, it will be much more than necessary to cooperate with Guatemala …

About the jaguar, studies a still carried out to know better the populations functioning. It is estimated about 70-80 individuals living in the area. Photo traps help to count them, taking into consideration that spot patterns are like their ID. The BAS facilitates studies carried out by the Environmental Research Institute of the University of Belize, on the behalf of the international organization Panthera. Among the threats, deforestation is the main concern as illegal activities are developing at the edge of the sanctuary.

How to visit Nature in Cockscomb?

Tubing on the river, so cool!

Be part of the 13000 yearly visitors of the Cockscomb Basin Wildlife Sanctuary! It is located off the Southern Highway, approximately 20 miles south of Dangriga. The entrance is at Maya Center Village, where the Maya Center Women’s Group collects the entrance fees to the protected area. From here, the actual park is six miles down a dirt road. Visitors can drive, hike into the park (roughly 2 hours), or hire a local taxi from the village (US$75).
As a non-profit organization BAS faces many conservation and development challenges and they need your support to advance efforts to sustain the most important natural systems in Belize for future generations. Support the great job and action of the Belize Audubon Society here. Other NGOs are doing a similar conservation work in protected areas of Belize like the Ya’axche Conservation Trust and the Toledo Institute for Development and Environment (TIDE), inspirated by the long-life work of the BAS.

The BAS will be part of the vote for the Responsabilité Sans Frontières’ grant for a non-profit project. Keep it in mind!