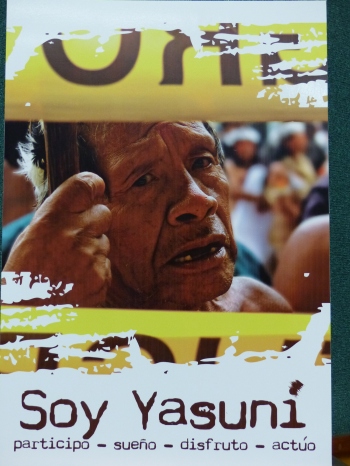 J'aime chargement…
The smallest but also the most densely populated country in Central America with 330 inhabitants per km ², El Salvador territory faces the gradual erosion of biodiversity and its natural habitats. Given the lack of involvement of government institutions more concerned by the development of the coffee and the tourism industries, a handful of men and women committed to maintain and protect the 3% of the territory still occupied by natural areas. Here I will present some of the activities of the SalvaNATURA organization in the Impossible National Park.
The Impossible National Park is located in the Department of Ahuachapán, southwest of El Salvador, Central America, specifically in the western end of the UNESCO’s Biosphere Reserve Sierra Apaneca-Llamatepec and next to the Ruta de las Flores, between the cities of Ataco, Tacuba and San Francisco Menendez. « Impossible »??? Interesting to check out what is going on this special rainforest, one of the last remnant untouched ecosystem of the over-populated El Salvador.
Despite my contact with SalvaNATURA in advance to organize my arrival, it was pretty complicated to reach the remote area. It is located between the top of the mountains and the coastal plain, between 250 to 1.425 meters. The road leading to public areas of the park is coming from Sonsonate and going towards the border with Guatemala’s Hachadura (this last was where I came from with my bicycle). The main entrance is in the sector of San Benito, after 13km of very (very) steep dirt road.
IMPOSSIBLE by bicycle for sure!  I had to take the slow bus to climb the mountain and arrive in the night at the Park entrance, just enough energy to open my tent in the wild campground, alone!

END_OF_DOCUMENT_TOKEN_TO_BE_REPLACED

J'aime chargement…
As a UNESCO World heritage site (1999), the Guanacaste Conservation Area attracted my eyes when I was thinking about the itinerary in Costa Rica. Located in the North-western side of the country, close to the Nicaragua’s border, it is the land of the second most extensive protected dry tropical forest in the World (just after the Kakadu National park in Australia). This was my first experience of the rich wildlife of Costa Rica.

The Area de Conservación Guanacaste (ACG) comprises 163,000 hectares of land and sea in the Northwest of Costa Rica. Encompassing several contiguous protected areas of various categories, the property is a mosaic of diverse ecosystems. The 104,000 hectares of land encompass a continuum of roughly 100 kilometres from the shore of the Pacific to the lowland rainforests in the Caribbean basin. END_OF_DOCUMENT_TOKEN_TO_BE_REPLACED

J'aime chargement…
Once more, we did not have chance to see many animals in this very rich in biodiversity protected area of Belize. The Cockscomb Basin Wildlife Sanctuary is part of the Meso-American biocorridor running from Mexico to Panama.
Belize (government and NGOs) tackles environment conservation as a national priority, with an extensive protected areas system, co-management operations and very motivated and skilled teams. The Belize Audubon Society, a renowned conservation organization, welcomed us and organize our amazing stay in Cockscomb. During two nights (entrance fee 10$/person, camping 20$/night/person), we really felt like sleeping in the middle of the rainforest, surrounded by animal noises. That was magic! Good to know that natural and easily accessible paradises still exist on Earth.

END_OF_DOCUMENT_TOKEN_TO_BE_REPLACED

J'aime chargement…
During our stay in Palenque, Chiapas, the Heritage Route discovered with interests the conservation program about the Scarlet Macaw. The Scarlet Macaw (Ara macao) is the largest parrot in the world and is member of a large group of Neotropical parrots called Macaws.

World Heritage in Danger of Extinction

In front of the Aluxes Eco Park with PhD Alejandro Estrada, Palenque, México

The Scarlet Macaw can be found in tropical rainforests of Central and South America, including Mexico, Guatemala, Belize, Colombia, Ecuador, Peru and Brazil. It  is one of most endangered species in Latin America. It is estimated that now only a mere 2% of the original populations exists in its wild habitat (the original distribution in Mexico covered the southern lowlands of Tamaulipas, Veracruz, Tabasco, Oaxaca and Chiapas states), which means about 50 individuals in the mountain region known as Chimalapas (Oaxaca, Mexico), 150-200  units near the Guatemalan border of Mexico (Biosphere Reserves Montes Azules / Sierra Lacandona) and 200 more between Belize and Guatemala. Mexico hosted the major part of the species populations. Then, not only is the conservation of the remaining populations in Mexico important for the country itself, but also for the whole world. In 2010, the species was listed as « in danger of extinction » by the Environment Agency (SEMARNAT). It is extinct in Palenque for more than 70 years ago. END_OF_DOCUMENT_TOKEN_TO_BE_REPLACED